People know what they don’t want at work—a sea of bland, uniform spaces where ideas
go to die. In fact, a recent Steelcase study of global office workers found that although 77 percent of people have their own assigned workstation, the vast majority—87 percent—spend two to four hours every day working someplace else. We wanted to know: Why are people migrating away from their desks? What kinds of spaces are they looking for? Is it as simple as adding some modern office sofas and a barista bar to give people the kind of workplace they want?
As it turns out, monotony is a huge motivator—just over half of people (51 percent) say they need an escape from working in the same place during their day, whether they were alone or with others. They’re also seeking deeper relationships with colleagues, and 43 percent believe informal spaces can help build more trust.

What people look for in the office

Quick and informal connections between colleagues

Use informal spaces for specific jobs

Look for a more comfortable and inviting workspace that is inspirational

People give lackluster scores to the ancillary spaces their companies provide today. Digging
deeper we saw what’s behind the ho-hum ratings: 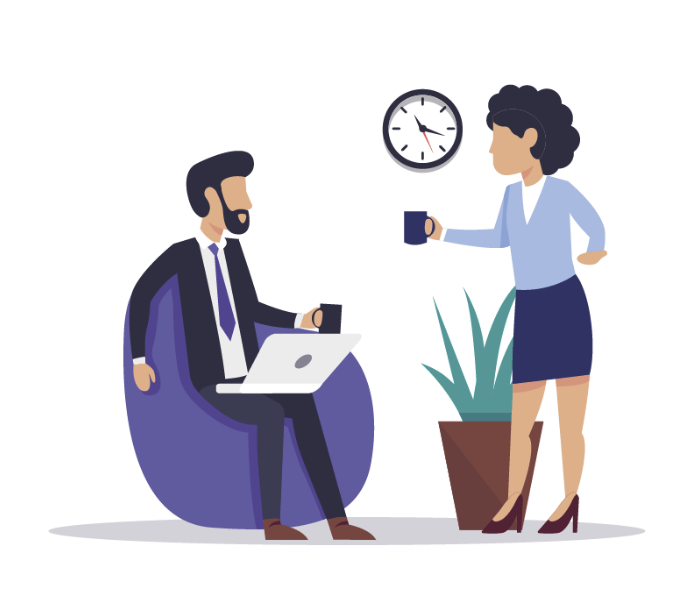 They say they don't have enough informal spaces

How to make informal spaces better

Younger and older generations agree—everyone likes informal spaces and uses them regularly—but for different reasons. Millennials are more likely to use dining/bar spaces to do focus work while older generations use these spaces for collaboration and socialization.
Lounge spaces are used by millennials as a place for privacy while older generations use these spaces socially. Millennials are also more likely to use a wider range of informal spaces and to adjust their furniture, where older employees tend to pick favorite spots to use and leave their furniture settings alone.

THE MORE THE BETTER

It shouldn’t come as a surprise: Companies that offer more casual, inspiring spaces are
perceived as being significantly more progressive than those who don’t.

HIERARCHY OF THE REQUIREMENTS OF THE OFFICE

Just as people have basic needs in life life food, water and safety, people have different needs at work too. In the office, organizations must provide people with technology, a diverse range of spaces that support different types of work and permission to use these spaces if they expect them to thrive.
According to the study, most organizations only provide people with the technology and permission to work in informal spaces. But what’s missing is the range of spaces where people want to work that support their physical, cognitive and emotional wellbeing.